Melissa:
Wow, that was one short month! I had forgotten it was short by 2-3 days. It's surprising how much of a difference 2 days can make.

I've been stumbling along this month with family stuff, content editing work, and re-writes. It's going well. Could be better, but well. I'm not going to complain. I'm content with the work I've completed.

Goals:
Christmas Warmth:  5,000 word goal.
-- I had stopped working toward this one at the end of January. I was content with what I added and will add and adjust when I go through re-writes with this one. This goal ended February 28th.

Something additional I wanted to share about Christmas Spirit, I'm 84 pages into 359 pages of the book. I've had sections that I've added a good bit and I've had sections I redid keeping the same idea but adding something that changes things in that scene. Those things could be reactions or feelings or even when something is done in the scene.

Want to see a picture of the page comparison? Maybe I'll start sharing an image each month, to see the progress even if it is slow. 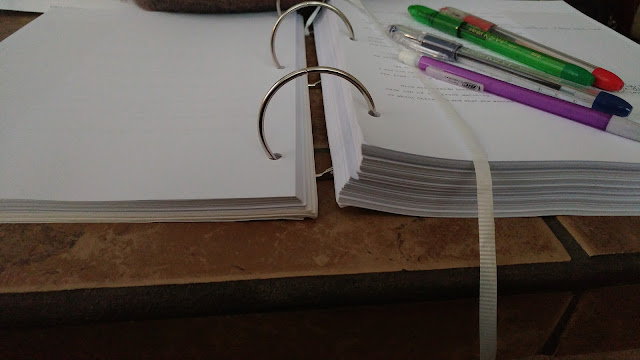 It looks like a ton of pages to get through yet, but that's okay because I feel like I've come a long way in what I have completed. I even had a great sentence to add come to mind when driving to work this morning! That's what happens to me after I work through a sections, I get a clear idea the next day since my mind slept on the idea. This idea was something that ties a previous scene and who Em is to the moment she's in. I love the feel when those moments hit me.

This book needs LOTS of work and still will when I'm done with these re-writes, but I have a great feeling about this book and series. If I can get it to where I want, with help from friends, I would love to share this one with the world.

At least that's what I'm thinking now, may change later. ;)
Posted by Melissa (My World...in words and pages) at 9:26 AM No comments: