So, we decided to hit one of our Nano projects this year - rewrite it.  I had *thought* I would get back to last years project with Alena.  Ha!  Jayda had other plans....she wouldn't shut up.  She started telling me pieces of things after I finished Nano.  So she stuck in my head for the new year, taking up the space and driving me back to her world.

So what am I doing and how?  I haven't a clue.  Really.  This is the second story idea I've even gotten this far with and the first I'm going back to read and rewrite.  So, I'm clueless but trying to stay organized....trying the operative word there.

I've started calling this draft six below...six feet below ground that is. lol.  It's that much of a mess I wouldn't even call it a rough draft.

What am I doing?  Making notes on the draft I have printed. and on additional pages if the paragraphs are to long for the page, even the back of the page gets notes too.  I also have a notebook I keep questions in along with comments of things I want to add or do or keep in mind to think on as I go.  I use sticky notes to write the question on and put in the notebook.  I have small stickies for parts in the story that I think I might want to refer back to, making it easier to find.  I have colored pens to help me get through as well.

This is what I've been carrying around the house with me: 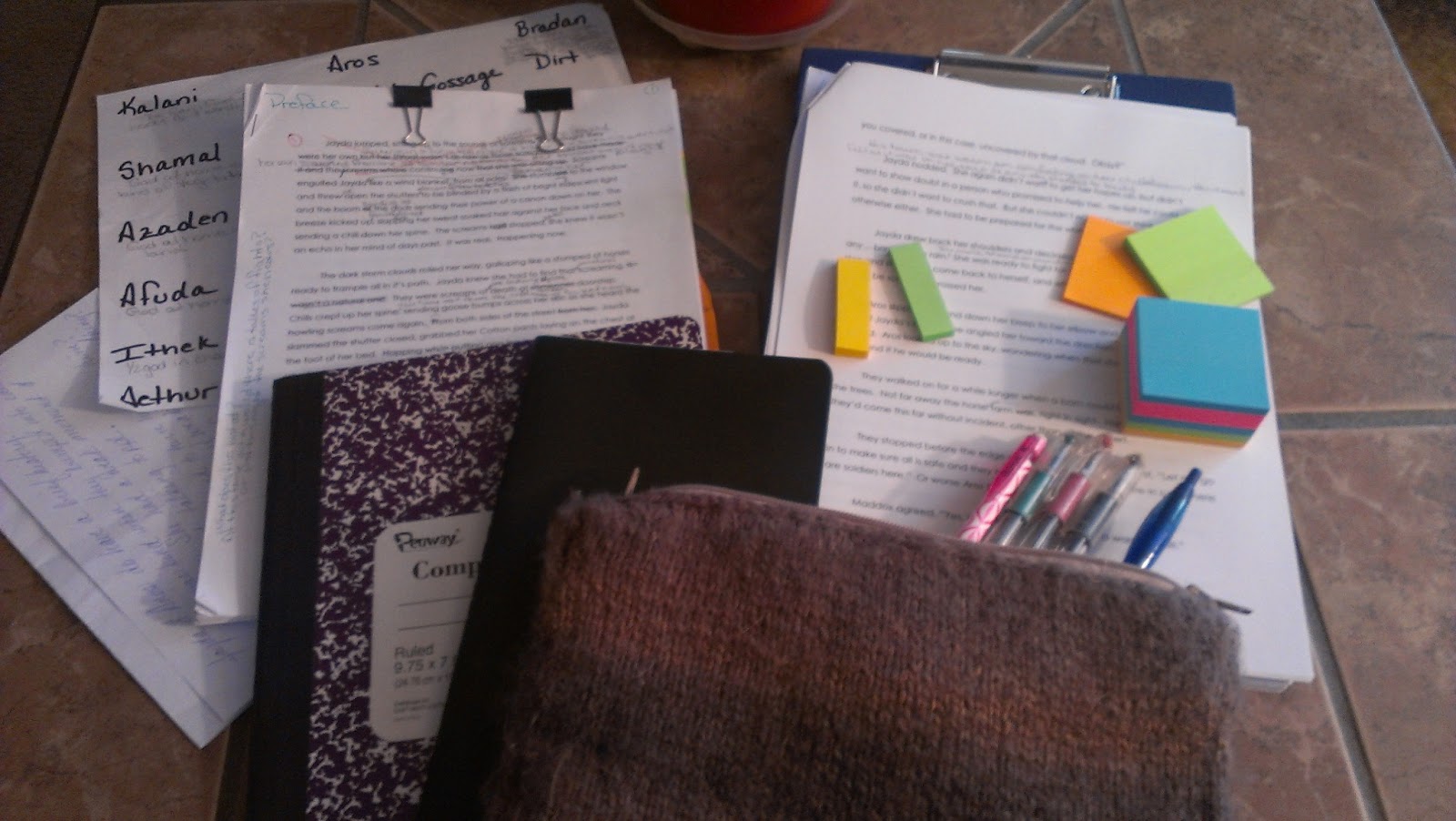 I think my family thinks I'm loony.  And I feel like I'm in school again with the stack as I move around. lol.

I'm one month in on rereading/rewriting and I think I'm about a third the way through the 50k hot mess I have from Nano.  I find I'm filling in a lot.  What I had thought I saw but didn't write the first time through with the rush.  There's a good bit with what's happening, descriptions, and back story that needs to go in.  Fleshing out more, in a sense.  I've added words, sentences, and paragraphs.  And removed some too.

This round of rewrites is for story basic set up.  I've found planted ideas I need to decide if I want or not.  Ideas I forgot about as the story line progressed.  If I want them, I'll have to work them in with the next round.  This really is bare BARE bones of a story here.  I do think, so far, I've surprised myself.  There's a touch more action than originally I had thought.  That's good.  But it too needs beefed up and worded properly.

I started to think on the preface after I started, and it's a bit to long.  I might have to pull it, drop hints of it in the story and make a novella out of it or just as a background section for me getting to know Jayda.  I'll see what happens.  Maybe even do the book in sections.  Who knows, that's a ways off.  But if I flesh it out a lot more I think it could be a great character defining novella for Jadya.  *shrug shoulders* Time will tell.

I know I have blant and stupid sentences here.  The next round will be to put sentences together to make one full one and better use of words.  I also keep reminding myself, show don't tell.  I want to show why these characters are this way, not just tell the reader.  Another thing that will have to be touched up with the next round.  But ideas I keep in the back of my head for round two.

If I keep at this rate, maybe I could have a working first draft by November! I can't give you a word count of what I've added/deleted since at this point I'm doing this by hand on printouts. But it feels like it's growing. :)

I have a planned day (which a friend Skyla! talked me into taking off work to go to the pub and write) set aside this month for just this. I have a few short story ideas I want to note as well. So maybe I can get through the rest of the reread/rewrite by mid-March (I'd like end of February, but it's a short month and don't want to be disappointed when doesn't happen). We shall see.

Melissa has done great so far with actually sitting down and working on her project. Me? My stuff sits in a pile on the floor, in a similar state to about this time last year.

I could spout all of my excuses like, I moved to my new house a mere ten days before Christmas, so I've spent a lot of time unpacking boxes, etc. that has taken away from my writing time. Or that I spent a good two weeks in January, sick as a dog. Both of these reasons are accurate but I know too that my motivation has been lacking. Well, maybe to put it a better way, I've allowed my nasty inner voice to tell me my work is a piece of crap. Shame on me!

So, after trying to combat said inner voice, I've started at least thinking about what changes can be made. (I also have a 2011 and a 2012 project, but for me, I decided that I should revisit the 2011 book and see what I can make of it.) There has been something bothering me about my main character's actions that just didn't fit with how I wanted to portray her. Finally, a light bulb clicked, sorting out that issue and hopefully leaving some room for more back story. Yay!

One problem: I haven't written out the idea. That won't remain for long though and it will give me a starting point to rework the first draft now, along with a few other details I want to add in. My final thought going into February is "No more excuses!"

My intent going forward is to work on my first Nano project and bulk it up a bit more with the new ideas and possibly expanding the story into one that is multi-faceted. My 2012 project needs more research as well as sorting out the logical flow of it all (I dropped the ball by the end, which would have readers scratching their heads in its current state, lol.) But first, I need to get it printed out too. There is something to be said about seeing the work on paper that gives it a whole new dimension, I think.

There are lots of writers out there, doing just what Melissa and I are, so good luck to all of you that are trying to make a go of your NaNoWriMo projects too!
Posted by Melissa (My World...in words and pages) at 5:27 PM No comments: